Ok, so while they are not married yet, you still get an idea of the direction a couple can go in their marriage when they start on the right foot.  Gari (short for Garianne) and James are the latest couple in our series on real answers on marriage.  Again, we are doing this series to help couple take an honest look at marriage as they prepare for their wedding.  So often, couples spend countless hours getting ready for a wedding day, only to have the marriage fail…. 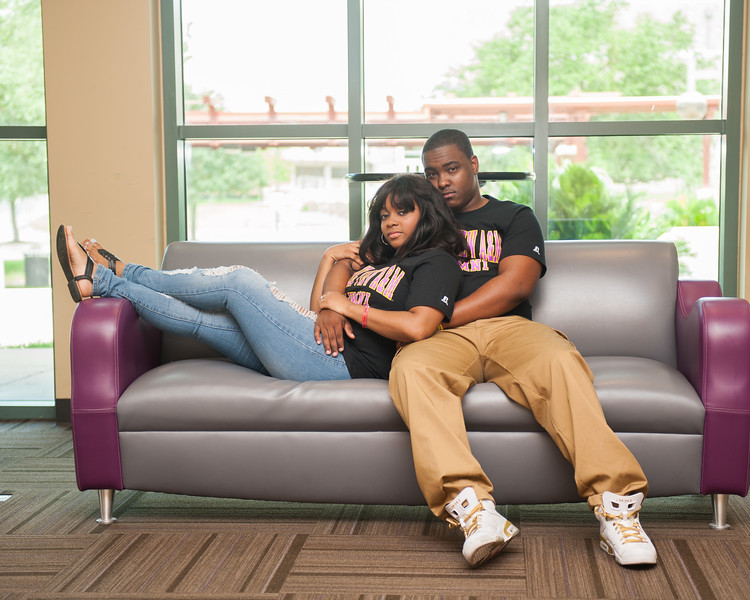 Husband name: James Salone
Wife’s name: Garienne (Gari) Stiggers
Wedding date: September 22, 2018
How many years have you been together: 4years

2. When did you know they were the one for you?

Garienne: After we met freshman there was a moment in time that we decided to take a break from each other because things were moving too fast too soon. Even with that time apart I couldn’t see myself building with anyone else, but fate brought us back together sophomore year and I was not going to let him go gain. James was different from what I was used to, and it was so refreshing that I had someone to grow with during my years of undergrad.

James: Well I knew that Gari was the one for me when I had an opportunity to just discuss her future. She was an intelligent, goal-oriented, God Fearing woman. Someone I could sit down with and talk with for hours. Being only a freshman I realized that many of my colleagues wanted to party and stay out late but she was able to find a balance with her social life and education. As cliché as it sounds whenever I laid my eyes on her everyone else sort of disappeared. She was the one for me in every way. Someone I felt I would grow close to, because she brought a smile to face every time we spoke.

3. What’s the one key to the success of your years of marriage outside of communication and trust?

a. One key to success is to remain deeply submerged in your faith in God, and always keep things interesting. Do not be afraid to be weird and goofy around each other.

4. Have both parties remained monogamous? (Have either of you ever cheated) If so, how did you reconcile?

a. We have never strayed away from each other once we were solid.

5. What are your goals/aspirations for the next 25 years in terms of becoming empty nesters if children are involved etc.?

a. In 25 years we will be 48, so we hope to be established in our careers and have a stable life. We planned to have one of those luxury Rvs and travel the parts of country that we have yet to see and have one of the best RVs at PVAMU Homecoming. Our children will be around 20 so they will be either in their first year in college or heading to college. We want to at least have some form of worldly travel under our belt as well.

6. Was there ever a moment when you gave up, and were just roommates, and how did you come back from that?

a. It was a time when we first started our freshman year where we decided that we weren’t ready for a relationship. We were still young and still trying to grasp the concept of college. Well as fate has it, the following year we joined the exact same organization, P.A.L.s (Panther Advisory Leaders), and somehow got placed in the same dorm mentoring freshman. As much as we tried to make it seem as though we had no history, there was no denying that we could not leave each other alone.

7. What advice would they give others in regards to making it work?

a. If you want to make a relationship understanding and acceptance is key. You are two different individuals, becoming one. You will not always agree at the end of the day, but the strength of one’s relationship depends on the obstacles you guys overcome and the love you share with each other. And more importantly, a man needs to know two words….”Yes Dear”. A Happy Wife is A Happy Life! ( The last part was all James)

8. If they could do it all over again what would they do differently to improve their marriage

James: To be honest, I wouldn’t change a thing.

9. When life got hard, how well did they know their spouse to give them the support they needed in their time of need.

Garienne: James can always tell when I am stressed as well my demeanor is different. Even through a text message he can tell when I am bothered by something. He knows what to do and say when he can help, but he also knows when to just let me to myself sometimes.

James: Gari knows when I am stressed about anything even before I approach her with the situation. She knows what to say to keep me fighting another day. She is my backbone through life.

10. What do you do to stay connected when your marriage hits a dry spell?

a. We are living in two different cities working on our own goals, and whenever one comes to see the other, instead of staying at a family at home we would get a hotel room and make it a mini get away cutting off our phones for a night.

11. Are you still as happy as in the beginning?

Garienne: I would say I am happier. Being that we have graduated from college we are away from all the distractions that came with being so involved and known around campus. Now we are at point where it can just be the two of us if we want it to be.

James: In my opinion, yes.

12. Do you do EVERYTHING together?

a. Not at all. We love our time together, but we also understand that we have different sets of friends. We respect the time we are with our friends, and at the same respect each other to where our time is balanced. However, all of our first time experiences have been together (traveling and etc.)

a. Not one person is the boss, but a decision that involves the two of us will not be made without the two of us. The small things, however, James usually leaves that up to me.

14. Do you both work outside the home? How does that affect the relationship?

We both are actually working in different cities right now until the wedding, and it has been a challenge to be away from each other and when we are it is for only a weekend. We have started to utilize every from of communication there is from texting, phones, emails, and FaceTime.

15. When you married were your long term goals exactly the same?

a. Our long- term goals are the same as far as what we want from our marriage and where we want to end up together.

16. Have they changed over time?

a. We don’t think they have changed as much as they have just gotten more specific.

17. Were you both believers when you married?

a. Yes, we were both believers when we got engaged, and not I believe our faith is getting stronger together.

18. Is there any one thing that has held your marriage together?

a. Honestly, besides the love that we share, what has kept us together through everything is the feeling we get when we are together and to know that there is no one else that can make us feel that way.

19. Anything that has caused it excessive stress?

a. The lack of communication caused us both tremendous stress because we were not telling each other what how we were feeling when we felt that way, and it would come out much later and turn into an argument. We had to learn to work through that the express our feelings right then and there no matter what the outcome would be.

20. Have you ever needed counseling?

a. As of right now, no have not been to counseling, but we will definitely enroll in premarital counseling before jumping the broom.

21. Have either ever felt “less in love” or loved less than in the beginning?

a. We have had a times when things got so bad that we didn’t talk for weeks, but at no point in time did our love ever change. If anything it was knowing that only someone you truly love could make you so angry at times, but you know that they also make you the happiest you ever been.

a. Happily raising our family and still building with each other.

23. Is marriage how you expected it to be when you were single or engaged? If not, how is it different

a. We always knew that marriage took work, but you really can’t prepare for it until you are in it.

24. How have you stayed together when the culture around says to leave if things get hard?

a. To be honest if we wanted to leave each other we would have done it have in college, but as we stated there was/ is no one else that we would love more. Besides that lifestyle of casually dating gets played out every quickly.

25. Have you ever felt as if you loved your spouse, but were not “in love” with them? Did you struggle with that? Did that tempt you to leave?

Garienne: We started dating back freshman year of college, 2011, and it took me to years before I told James that I love him. I’ve always had this wall built up and he was the only man willing to stay around the slowing break it down. I just had to be sure LOL.

James: I’ve always loved Garienne since the moment I met her. It took us time before we fell “in love” but Fate brought us together. We were young and not ready for a relationship, new to college, and we so happen to cross one another’s path. Us coming back our sophomore year made us fall in love even more because we couldn’t escape how we felt for one another.

NATHAN HAMILTON IS A CYPRESS TEXAS PHOTOGRAPHER OFFERING WEDDING PHOTOGRAPHY AND FAMILY PHOTOS IN CYPRESS AND FAMILY PHOTOS IN KATY. SERVING THE HOUSTON, TEXAS METRO AREA INCLUDING HOUSTON, KATY, PEARLAND, GALVESTON AND THE SURROUNDING AREA. IN A LIFETIME PHOTOGRAPHY IS ALSO AVAILABLE FOR DESTINATION WEDDINGS AND EVENTS.CHECK OUT OUR WEDDING PHOTO GALLERY AND OUR ENGAGEMENT AND PORTRAIT PHOTO GALLERY AND CONTACT US FOR MORE INFORMATION AT 346-254-7468 OR EMAIL NATHAN@IALPHOTO.COM